September 26: Top Ten Books That Feature Characters Who Would Be In Hufflepuff
Obviously this is an entirely subjective blog post, considering that (to my knowledge) none of these characters have been officially sorted into a Hogwarts house, but it’s a bit of fun! Now, as any Harry Potter fan will know, the main characteristics of Hufflepuff students are: “just and loyal / Those patient Hufflepuffs are true / And unafraid of toil.” Everyone should want to be a Hufflepuff, and certainly date a Hufflepuff! 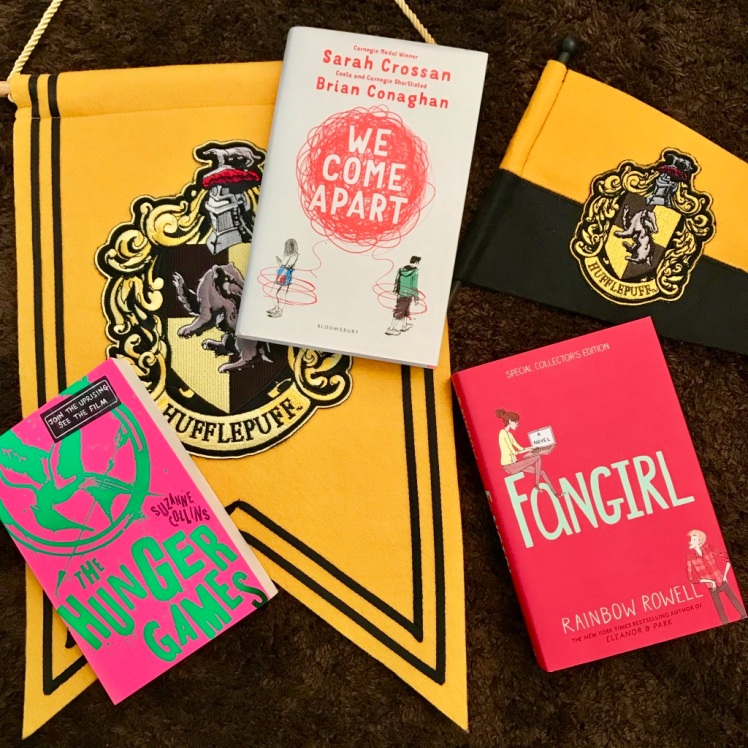 1. The Hunger Games by Suzanne Collins – Peeta Mellark
I can’t think of a more Hufflepuff-y character in literature than Peeta. He is willing to give up everything to save the person he loves, and there is no greater sacrifice.

2. They Both Die At The End by Adam Silvera – Mateo Torres
Mateo is just such a lovely, genuine guy who would never hurt a fly. He’d be a first class friend to anyone lucky enough to get to know him.

3. We Come Apart by Sarah Crossan and Brian Conaghan – Nico
Nico is such an extraordinary individual, concerned only with pleasing other people, and he inadvertently saved his unlikely friend, Jess.

4. Bridget Jones’s Diary by Helen Fielding – Bridget Jones
Everyone loves Bridget. She’s the average British woman: unlucky in love, struggling with pleasing her family and making time for her friends, whilst juggling a career and personal responsibilities. She handles her life in such an amusing, but charming way.

5. Thirteen Reasons Why by Jay Asher – Clay Jensen
A typical introverted individual, Clay is honest and kind, and feels emotions and responsibility on a deeply profound level.

6. Our Song by Dani Atkins – Joe
In order to understand just how much of a gentleman Joe is, you really ought to read this book. I wouldn’t want to spoil his incredible nature for potential readers.

7. Me Before You by Jojo Moyes – Louisa Clark
Lou isn’t perfect (who is?!) but she has what she thinks are Will’s best interests at heart at all times. She’s funny, full of life and unashamedly herself. We should all want to be more like Lou (and Hufflepuff’s in general).

8. Twilight by Stephenie Meyer – Esme Cullen
As the most welcoming and understanding of all the Cullens, Esme is every inch the mother figure of the series.

9. The Lion, the Witch and the Wardrobe by C.S. Lewis – Lucy Pevensie
I find it rather strange that (at least in my opinion) that the four Pevensie siblings can be sorted perfectly into the four houses: Peter/Gryffindor, Susan/Ravenclaw, Edmund/Slytherin and Lucy/Hufflepuff. It’s almost as if the four houses characteristics were built around these children.

10. Fangirl by Rainbow Rowell – Cath
As a recluse, Cath lives her life in her own little bubble, whilst also feeling personally responsible for the problems faced by those she loves. She’s also incredibly dedicated to her craft.