April 12: Top Ten Books Every Thriller Fan Should Read
For this week’s TTT I decided to list my six favourite thriller/mystery/crime novels and four that I’m very excited to read. As one of my favourite genres, I’m constantly on the lookout for new and exciting releases, so if you’ve got any recommendations please drop me a comment below! 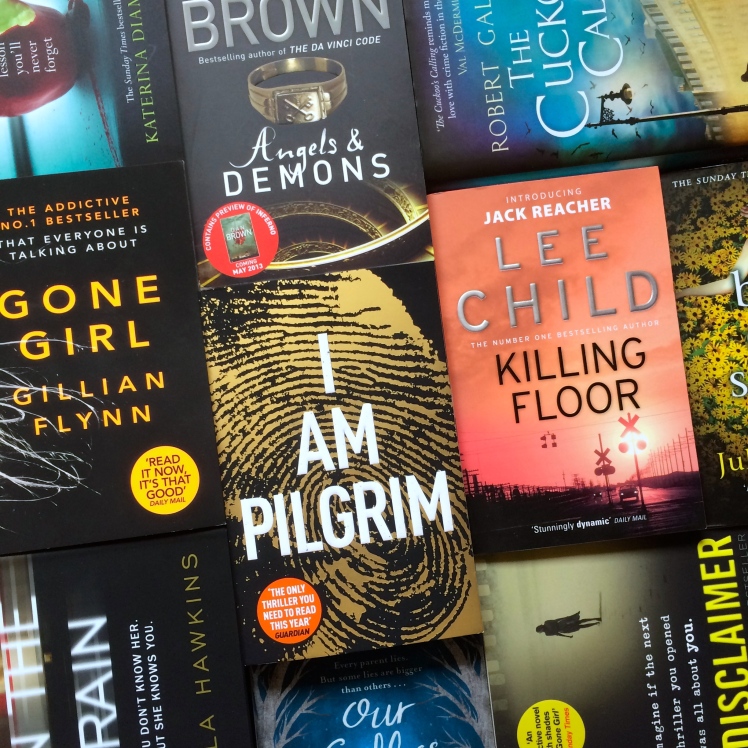 1. Killing Floor by Lee Child
The first in the Jack Reacher series is gritty: the plot is fantastic and the character development – even at the beginning – is brilliant!

2. Angels and Demons by Dan Brown
Whilst most people rave and/or rant about The Da Vinci Code, I found this prequel to be much more intense as a thriller: the deaths were gorey and well-timed and the story is full of suspense.

3. The Cuckoo’s Calling by Robert Galbraith
J.K. Rowling’s first novel in the genre is a masterpiece of creative writing, and as a detective story, kept me guessing until the final page.

4. Gone Girl by Gillian Flynn
This is undoubtedly a twisted tale, one which is so gripping it is difficult to put down. The characters are incredibly flawed, which makes for an emotional and powerful read.

5. The Girl On The Train by Paula Hawkins
With one of the best endings of any book I’ve ever read, this novel follows alcoholic Rachel and her imagined relationship with an array of people she sees out of the window every day: until one day she becomes thrust into their real lives.

6. I Am Pilgrim by Terry Hayes
This beast of a book is clever, intricately weaved and follows a suspected terrorist plot across continents: it’s so good it could be real.

7. Disclaimer by Renee Knight
I bought this book when it was hot off the press from Goldsboro Books. It’s now become so popular that I bought a paperback as well so that I can devour it at the next possible opportunity: as for the premise, a filmmaker recreates a crime novel, only to discover a real-life death in the process.

8. Black-Eyed Susans by Julia Heaberlin
This book was recommended to me by my friend Alice – and I always listen to the few friends who recommend me books. I’m in the dark as to the plot on this one, but I’m excited to read it as it’s had some excellent reviews.

9. The Teacher by Katerina Diamond
I picked this book up because it’s set in Exeter, Devon (where I went to university), and follows a serial killer who is picking off inhabitants in ever more gruesome ways: sounds intense.

10. Our Endless Numbered Days by Claire Fuller
I’ve had this on my TBR since it became a Waterstones Book of the Month earlier in the year: it’s been described as a fairy-tale thriller, which sounds exciting and creepy.