August 18: Top Ten Of Your Auto-Buy Authors
Auto-buy authors: authors that you don’t even have to know what the book is about, but you will buy their books! They are the ones I pre-order without thinking about it, in order to be amongst the first to devour their new book, or to have ready and waiting for such a time as I feel inclined to do so. 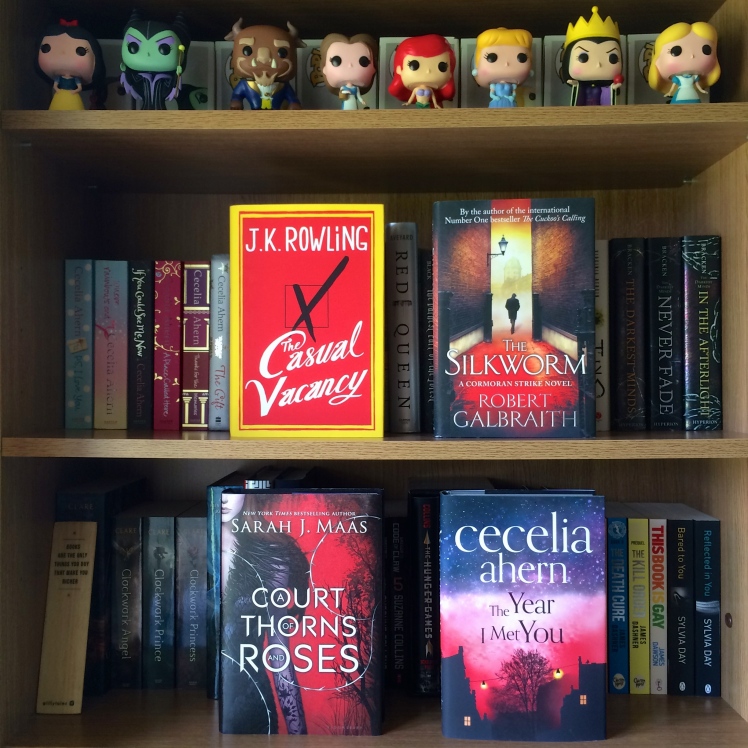 1. J.K. Rowling
Unquestionably my number one (and two – see below) is the Queen, JKR. Creator of the most loved children’s series of all time, ‘Harry Potter’, I will forever have her upcoming releases pre-ordered the day they are announced. Unfortunately, she seems to have halted her work at the present time, in favour of her male counterpart.

2. Robert Galbraith
J.K. Rowling with a suit and tie, Robert Galbraith is the famous author’s pseudonym, and the writer of the ‘Cormoran Strike’ detective series. I absolutely adored the first book, ‘The Cuckoo’s Calling’, but was slightly underwhelmed with the second, ‘The Silkworm’. At present I am eagerly awaiting (and have pre-ordered three times) the third installment, ‘Career of Evil’ which is released in October.

3. Sarah J. Maas
I only began reading Sarah J. Maas’s works earlier this year, and I’ve already devoured four volumes. Currently she has five books out and available to the public, but next month sees the her sixth, and greatly anticipated, novel “Queen of Shadows” is released – so I’d better get caught up on the series.

4. Cecelia Ahern
I adore Cecelia Ahern’s books – I think they are beautiful stories wrapped up in ribbon. I’m currently in the process of re-reading her entire collection of novels (which are more extensive than I first thought) and every piece of literature is wonderfully crafted and overflowing with emotion. Her 12th novel is released later this year, which I am eagerly anticipating.

5. Anthony Horowitz
Despite (at present) only having read the first six books in his ‘Alex Rider’ series, I still frequently pre-order and purchase Anthony Horowitz’s new releases, including his ‘Sherlock Holmes’ books and his upcoming ‘James Bond’ novel – pre-ordered, of course. I love his writing style and the amount of action his books contain.

6. Rick Riordan
Rick Riordan is an author by whom I have only (currently) read two books by, but will still pre-order his upcoming releases. I adore reading about mythology, and I really can’t explain why I’ve neglected to progress further than the first two ‘Percy Jackson’ books – but that hasn’t stopped me from pre-ordering his upcoming novel “Magnus Chase and the Sword of Summer”.

7. Lee Child
Every ‘Jack Reacher’ book I’ve read to date I have thoroughly enjoyed. I am reading them in chronological order, so even though it will be years before I am caught up, I still pre-order the latest releases – usually from Goldsboro Books, so they are signed 1st editions, though I’m not sure I could ever bring myself to read a signed 1st.

8. Rainbow Rowell
Despite only (at present) having read “Fangirl”, I own all her current releases (with firm plans to read them over the next year or so) and have pre-ordered “Carry On” purely out of curiosity. I didn’t particularly like the fanfiction elements of “Fangirl” but I am interested in seeing how ‘Harry Potter’ has influenced Rainbow Rowell’s upcoming novel.

9. Suzanne Collins
Who wouldn’t love a new series by the author of “The Hunger Games”? The day Suzanne Collins announces a new book I will be on Amazon placing my pre-order (along with thousands of others). Thankfully I have the ‘Gregor the Overlander’ series to tide me until such a day arrives.

10. Stephanie Meyer
I might have been late to the party, but having read the final three ‘The Twilight Saga’ novels this year, I am now officially a Twihard. I’ve yet to read “The Host”, but I’m delaying that purely because I will then have exhausted Meyer’s collection of works – she needs to get on and write something else.