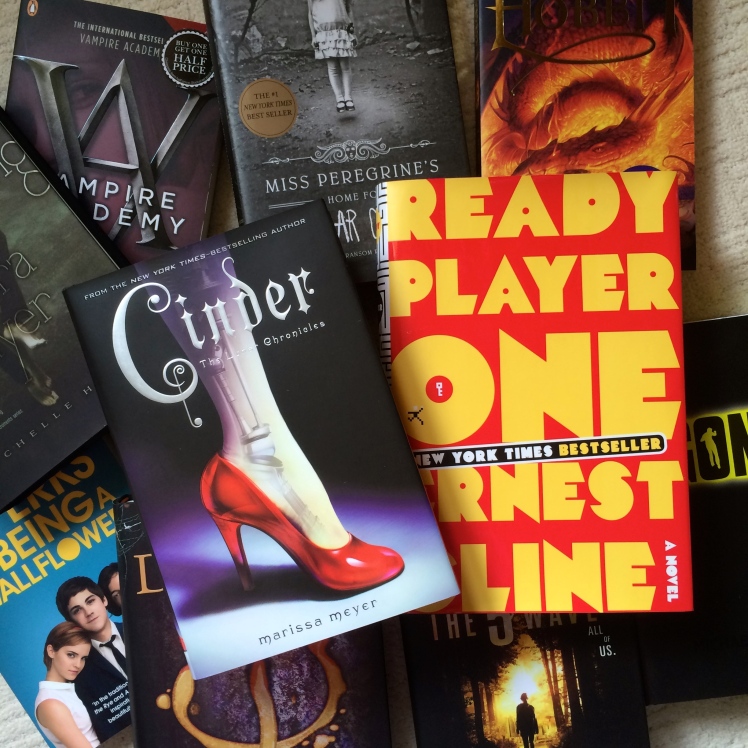 1. The Perks of Being a Wallflower by Stephen Chbosky
Despite owning this book since around the time the movie was released in the cinema (which I went to see) both in paperback and on my Kindle, I’ve yet to read it, and I don’t know why – it’s so short I ought to be able to read it in one sitting! Everyone I’ve spoken to says it’s absolutely amazing, so I should probably get on that sooner rather than later.

2. The Unbecoming of Mara Dyer by Michelle Hodkin
My brother bought my the ‘Mara Dyer’ trilogy for my birthday/Christmas last year and I’ve yet to start on it. I don’t know much about it other than I gather the premise is a somewhat paranormal/psychological YA thriller, which sounds intriguing.

3. The Hobbit by J.R.R. Tolkien
I’ve tried to read ‘The Hobbit’ on at least two occasions, but I just couldn’t get into it, but I’ve promised myself that it’s third time lucky. I absolutely adore ‘The Lord of the Rings’ films, so it’s my target to be able to read them at some point, but first things first, I have to read the prequel.

4. Cinder by Marissa Meyer
I’ve only recently started reading fairy-tale retellings (and absolutely loving them) but I’m slightly reluctant to read ‘Cinder’ as I’m worried that I’ll hate the cyborg element, so I’ve been putting this off – for too long. I should probably see what everyone is raving about.

5. The 5th Wave by Rick Yancey
This is another book I’ve had for over a year (along with the sequel), which sounds interesting, but I’ve just yet to pick it up. I believe it’s about an alien invasion and a love story between a human and an alien – sounds seriously creepy.

6. Gone by Michael Grant
The premise of this book (and series) sounds absolutely amazing – I love the whole end of the world/children targeted type of novel – sadististic huh?! It’s one of my favourite genres, but I think the length of the series is slightly daunting.

7. The Darkest Minds by Alexandra Bracken
Another book in said genre, this time with superpowers, it sounds so interesting, but I’ve got so many books on my TBR that this keeps getting pushed down the pile. I’ve heard Alexandra Bracken is releasing a new book in January, so I want to read this before then, so I can jump on the bandwagon with ‘Passenger’.

8. Miss Peregrine’s Home For Peculiar Children by Ransom Riggs
JesseTheReader always talks about his favourite book (this) and recently Katytastic also read and loved this novel, and the plot sounds absolutely amazing, but sometimes I’m concerned that books are overhyped in such circumstances, so I avoid them, but I will get to this.

9. Vampire Academy by Richelle Mead
I’m slightly hung up over ‘The Twilight Saga’ at the moment, which I only finished last month, so I need something to cure my Edward/Jacob ailment, and I’m hopeful ‘Vampire Academy’ will rectify that.

10. Ready Player One by Ernest Cline
Possibly the one book on this list that I most want to read, and I’m completely at a loss as to why I’ve yet to pick it up. I love video games and the premise sounds really interesting (it reminds me of ‘Eagle Strike’ by Anthony Horowitz?!) and I want to read this soon.

Have you read any of these books, or any other books by one of these authors? Which should I get to first? It’s difficult to get my head around all the unread hyped books on my TBR!