It’s been two weeks since I finished a book – I think that’s the longest it’s been between books all year – but I’m ok with that since I knew this month was going to be a little slower for me in terms of reading, and subsequently, blogging.

Regardless, today I finished my 26th book of the 2015 Reading Challenge: #16 A book from an author you love that you haven’t read yet. Last month I read my first Sarah J. Maas book, “Throne of Glass”, which I thoroughly enjoyed. It’s ‘Hunger Games’ cross ‘Game of Thrones’-esque style was instantly appealing, and that explains why Sarah J. Maas shot onto the list of my favourite authors. This month I continued with the series, by reading “Crown of Midnight”, the second in the epic six-part bookbuster (think blockbuster, but with books!)

My Goodreads Review
“‘Crown of Midnight’ is the second book in the ‘Throne of Glass’ series. It follows newly crowned Kings-champion Celaena, who is sent on missions to retrieve information about individuals against the King, before assassinating them. It simultaneously follows Celaena’s personal mission to discover why the King is so powerful. This second installment contains magic, which is outlawed in the world, and is possessed by the most unlikely of characters.
This book is filled with twists and turns, murders and lies, and there are some major revelations about who Celaena is and the power she potentially holds. However, the book does jump around a lot rather unexpectedly, in relation to the point of view of the narrator, which can be slightly confusing. As with ‘Throne of Glass’, there is a love triangle between the three main characters: Celaena, the Crown Prince Dorian, and the Captain of the Guard Chaol, but Celaena is much more certain of what she does and doesn’t want in this book.” 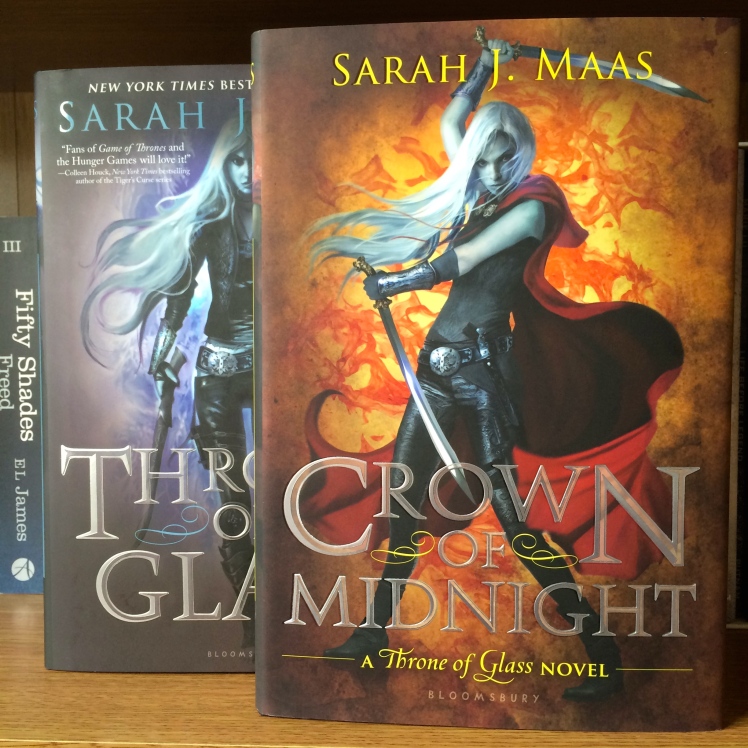 There’s really not a lot else I can say without stating major spoilers about either this book or the previous book. Once again I did thoroughly enjoy this book, and as with last time I listened to the audiobook, which was great but I don’t think I paid enough attention to the little details, thus I think my overall experience wasn’t as good as it would have been had I simply read the book (noted: I will read the “Heir of Fire” novel, but I will probably listen to the audiobook of “The Assassins Blade” first).

After reading this book, it just confirms Sarah J. Maas’s place on my favourite authors list!