Top Ten Tuesday is a weekly meme created by The Broke and the Bookish, each week focusing on a different top ten list. This week was unbelievably difficult: my top ten authors of all time!

April 21: Top Ten All Time Favourite Authors
This list was actually incredibly difficult to compile, not because I have so many favourite authors, but because I have so few. I am notoriously bad at devouring series – and I have no doubt many people will use the authors of bestselling series, especially fans of YA – but I am unable to do that. Whilst I usually see it as a good thing that I flit between authors and genres to an extent that is pretty much unrivaled compared to my friends and family, it did make it exceptionally difficult to choose ten authors who I’d read more than one book of – indeed my choices didn’t always reflect this! 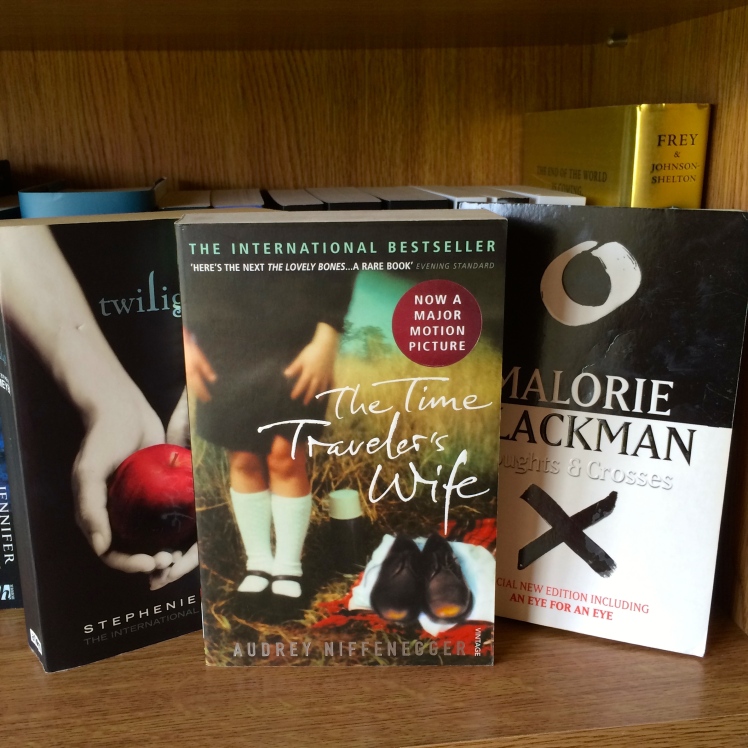 1. J.K. Rowling
Ah, Jo. Commonly referred to as The Queen – yes, with a capital. You’ll all know who J.K. Rowling is unless you’ve been living under a rock for the past 18 years. I’ve been a fan of her and her writing for 14 years, and I have no doubt that ‘Harry Potter’ has shaped me into the person I am today. I know that I will purchase each and every book Jo releases until the day she writes no more. And even then, I’ll keep collecting!

2. Robert Galbraith
I’m going to treat Robert and Jo as separate entities, after all, they’re totally different people. I should know, I’ve met him. And her. Totally different. Robert wears a tie for starters. I love Strike and Robin’s adventures, indeed “The Cuckoo’s Calling” was my favourite read of 2014, and I am eagerly awaiting book #3, which as yet is untitled and undisclosed as to its release date.

3. Malorie Blackman
Possibly my favourite book ever released (and certainly the book I’d recommend above all others) was written by Malorie Blackman. That book: “Noughts and Crosses”. Every time I read it the emotions swell. It is a truly heart-wrenching story about forbidden love (that genre seems to have been exploding of late, so if you’re searching for a novel about forbidden love, this is about as good as it gets!) I’ve read several other books by Malorie, including the sequels to “Noughts and Crosses”, and each time they captivate me entirely.

4. Suzanne Collins
The author of my favourite trilogy, “The Hunger Games”, I’ve yet to read any of her other books, but I’m going to give “The Underland Chronicles” a go at some point. I absolutely adore the world she created in ‘Hunger Games’, and the characters felt so real – I actually felt emotionally attached to a couple, which is rare for me – and the situations in which they were placed were terrifying yet plausible.

5. Stephenie Meyer
Controversial perhaps, but 2015 has already been the year of ‘Twilight’ for me. I’ve re-watched the five movies (on Blu-Ray for the first time), and read “New Moon” and “Eclipse” (the 2nd and 3rd books in the ‘Twilight Saga’) for the first time, which I absolutely loved, and I’ll get to “Breaking Dawn” in the coming months. Whilst I don’t think her writing is amazing, she still creates captivating scenes, and the occasional amazing character.

6. Cecelia Ahern
The good old fashioned romance. The easiest way to while away a couple of hours is sitting with a Cecelia Ahern book in your hands. They may not be the best literary works ever published, but the stories are sound and the characters feel real. I am slowly working my way through her catalogue of novels, and there are more than I thought! Cecelia’s books are perfect for long winters nights, snuggled up with a hot chocolate by the fire. I could just do that right now actually!

7. Lee Child
I love a good mystery/thriller style novel, and I absolutely love the character of ‘Jack Reacher’. Thankfully Lee has released enough books to last me a lifetime, which means there’s more than enough Jack to go around when I feel like delving into another crime scene. I love that with every book we get to learn more about Jack, whilst still focusing on the mystery at hand. Winner.

8. Anthony Horowitz
Author of one of my favourite children’s series, ‘Alex Rider’, Anthony Horowitz is an expert at placing characters in creative situations. I still love to revisit an ‘Alex Rider’ book from time to time – indeed I did just that last month – as they are fast-paced and full of action and adventure. There are so many books by him that I want to read in the future, including the new Sherlock Holmes stories, which I have heard fantastic things about.

9. Audrey Niffenegger
Author of my favourite standalone novel, “The Time Traveler’s Wife”, despite only having read that one book written by her, I simply couldn’t omit the excellence of that piece of work! I read it in 2014 and awarded it 9/10 – one of only two books to receive such a mark (10/10 has as yet proven elusive). It is a mindblowing, powerful and beautiful piece of literature, and my absolute adoration of this novel has led me to not want my perception of this author to be hampered in any way, thus I haven’t read anything else by Audrey Niffenegger at this point in time. However, I have heard a sequel is in progress, which I am already eagerly awaiting!

10. Jacqueline Wilson
I simply couldn’t omit my favourite childhood author. I’m currently in the process of re-reading my collection, before handing them down to my younger cousins. I’ll probably keep all my hardcovers and the two I had signed when I met her in 2004, but all her books are highly nostalgic to me. Even though they do not speak to me as they did a decade ago, I read them with fondness of the memories and opinions I formulated around her books in the late 1990s/early 2000s.

That was so much more difficult than I anticipated. I could quite happily have named my top two (or even number one), and left it at that!