It’s fair to say that I didn’t expect that my 2015 Reading Challenge would get off to such a great start. I’m clearly very motivated to complete this challenge (it’s just as well really, as I’m not feeling especially motivated to do anything else…)

Last night I was contemplating which book to pick up out of my three current reads (“The Rosie Project” by Graeme Simsion, “My True Love Gave To Me” edited by Stephanie Perkins or “A Clash Of Kings” by George R.R. Martin, but none of them really spoke to me at that precise minute. On the spur of the moment, I decided to switch on my Kindle, something I’ve only done a couple of times in the last six months, and that led me to decide to re-read Lemony Snicket’s “A Series of Unfortunate Events: The Bad Beginning”. When I was eight or nine I read the first three books in this series, but didn’t really get into it in a big way, but as it’s a quick read, and it fulfilled #33 A book from your childhood, I decided to pick it up (and subsequently whizz through it).

My Goodreads Review
“Unfortunate is right. In my first childhood revisited novel of 2015, Lemony Snicket’s world hasn’t stood the test of time, at least with me. I read the first three books when I was younger, but didn’t get into them beyond that, and now looking back I can understand why.
The plot was thin (it’s a kids book, so that’s understandable) but the characterisation was good, especially regarding Count Olaf. The descriptions were generally good, however in some instances “explaining the long, difficult words” felt a little condescending (although it’s probably an excellent way for children to further their vocabulary!)
If you are after a quick read, with an important life lesson that not everything turns out alright in the end, then this is probably a good book to pick up. In a day where all novels end with good triumphing over evil, it is refreshing that this series does not follow that predictable format (however, of course it is predictable in the opposite sense). ” 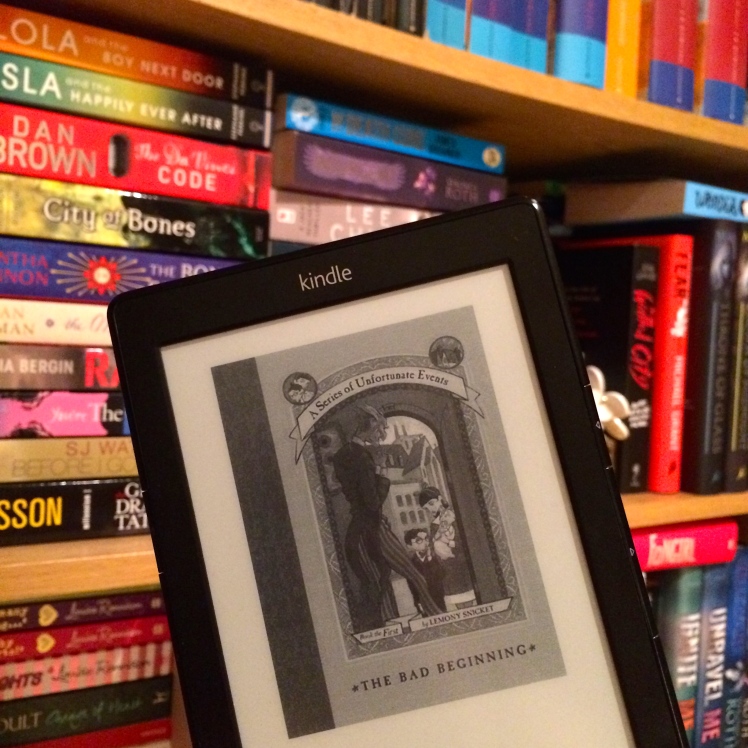 I’m not sure when I’ll read the other *twelve – yes twelve* books in this series. I have the next two loaded onto my Kindle, so I may well pick them up in the future. Out of the three books I’ve read so far in 2015, it is my least favourite, so the remaining books are not high on my TBR list. Regardless, I have to say, reading on my Kindle again was an enjoyable experience, and I do believe that I read more when I’m less concerned with pages numbers, and when the end of the chapter is, so credit where credit’s due Amazon. You made a great product there!

#33 A book from your childhood – A Series of Unfortunate Events: The Bad Beginning by Lemony Snicket (4/10)

Three down, forty-seven to go.